I am having a clear-out of paperwork and memorabilia which has been taking up a lot of space for too many years, and attempting to find a home for some of the better pieces; hopefully one of the museums may be interested - if not for display then for resale to make a bit for restoration projects.

Anyway the following may be of interest to MRW enthusiasts, including a marketing leaflet introducing the Dennis Lance in June 1995. 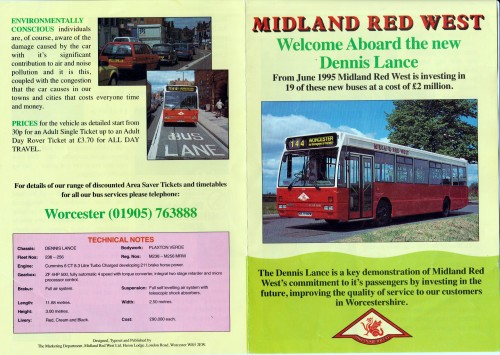 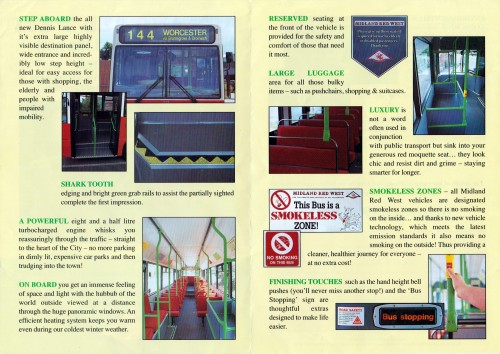 From 1994 to 1998 I was unable to find full time employment and got by on dole money and any late shifts on a part time casual basis with MRW at Worcester and Kidderminster driving Nationals, Darts, Leopards, Lynxes and Lances. It was a roller coaster existence waiting all the morning for a phone call which might come at 1.30 pm "Can you come and do the 14.49 192 Kidderminster to Ludlow and the rest of the turn?" Some weeks there could be six or seven lates on the trot and then a barren couple of weeks with nothing followed by a couple of days the next week. I was not popular with the Employment Office who had to ratify my spasmodic income against unemployment pay, not to mention that my savings were depleted to stay afloat! It is why I am dead against anyone having to work zero hours contracts when they need proper guaranteed 40+ hours per week. It was only when the automatic gearbox Varios came in 1998 that I was able to drive on a full-time basis again; my disability had previously prevented me from depressing a clutch pedal on 608 and 609 minibuses.

Anyway, here are Kidderminster running cards 13 and 14 with the late turn components highlighted in bracketed section; 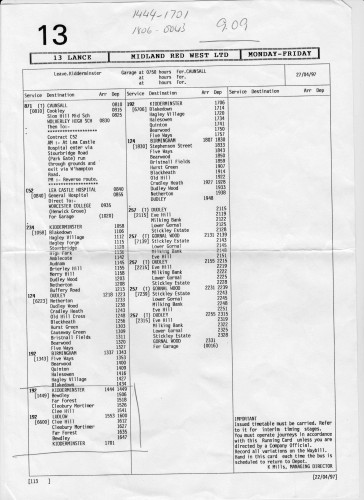 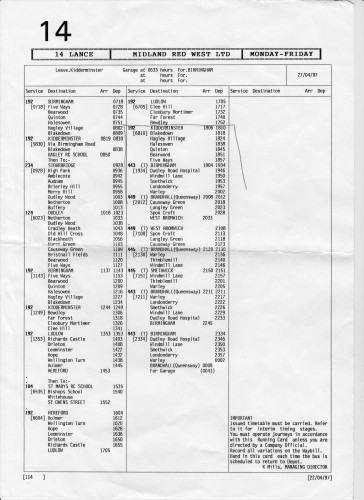 Love the running cards and seeing the intricate interworkings, thanks.
Top

one of the best running cards Kidderminster had and I wish I still had a copy of it in the days when the Lynx's were first allocated. It started in the morning at around 0630 on the Montgomery outstation (which was a pub car park) worked it way in service to Ludlow and then back to Kidderminster on the 192 by the early afternoon. Straight on the pumps and refuelled and off into the Black Country ending up on Dudley locals and back running into Kidderminster depot at around midnight
Top

I remember catching a 192 or 292 from Kidderminster to Ludlow which then formed the 773 (?) to Newtown which I took. My initial memory was of catching the same vehicle from Worcester on the 303 first, but I'm guessing time is playing tricks on me as I guess a Worcester bus wouldn't end up out there?
Top

Sadly can only just remember the last days of the Shropshire network. Quite easy to work out how Hereford and Kidderminster swapped buses around daily but always wondered if there were regular swaps between Hereford and Worcester of Tigers and Nationals, and of Lances post-192. Apart from 1010, 853 and 756 nothing seemed permanent in Hereford but never actually saw them swap.
Top

bringstybeast wrote: ↑
18:13 Wednesday 23rd January 2019
I’ll join the ranks that would love to see any more old running cards if there are any still around...

Link is to a set of Worcester Saturday turns and cards from 2006, during the period when Kidderminster were working certain journeys on Service 144, and vehicles would swap between depots each day. Cards marked with a "K" are from Kidderminster but are included because they are used by a Worcester driver at some point.

That was very easy via the 420. The vehicles were swapped in Worcester bus station or driven between garages by mechanics or spare drivers.
Top 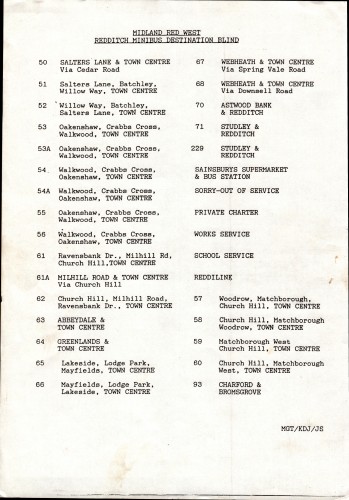 This is destination blind list for the Redditch Rediilink Minibuses. It is the second version of the blind and was fitted to the vehicles in 1988 after MRW won the contracts for services 50,63,64, 229 and the free bus to Sainsbury's. The latter very soon became a big bus turn due to it popularity with passengers. Interestingly the services 70 and 71 had yet to be introduced but were on the blind and minibuses were never used on the 57, 58, 59 or 60.

The first version of the blind when the buses were introduced had two destinations for each service one for the out of town destination and one with town centre on - Most drivers never changed the blind so it was dropped on the second version of the blind. This also shortened the blind as they had a tendency to shift on the rollers and damaged As with all three original minibus networks the service number was in a box around the number. Again this was dropped to allow larger numbers to be used. On the original Reddilink blind service 50 was Redditch to Inkberrow a route never run with minibuses or a number that was used for that service
Top
Post Reply
8 posts • Page 1 of 1

Users browsing this forum: No registered users and 6 guests