by TimBrown
Wright Streetlite SK19 EYP working 303 this morning in Crowngate bus station. Snatched shot just before it departed. Is this owned by Rotala or a demonstrator to cover warranty claims? 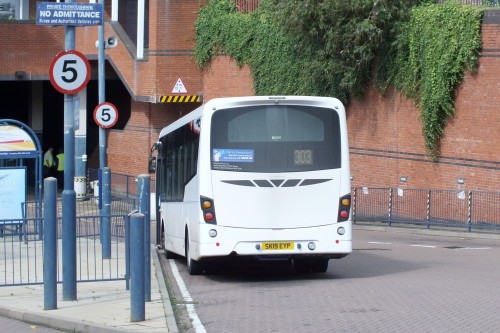 Also took this picture in Foregate Street of two delivery vans blocking the incoming bus lane at 10-30 this morning. I haven't driven a bus for more than 15 years, but it still winds me up whenever I see it and this situation continues all through the day with nothing done by the authorities i.e. police, traffic wardens and councils. Does G4S and Parcel Force have carte blanche to park wherever they want to do their business? It isn't only them, I see large artics and vans delivering supplies to Tesco and Sainsburys supermarkets.

The Barbourne bus lane also attracts deliveries lorries like flies round dog poo during morning peak period as well - no wonder one driver who transferred to Worcester 20, or so, years ago from North Wales called Worcester a 'wild west city'. Nothing has changed; if anything it has become even worse! 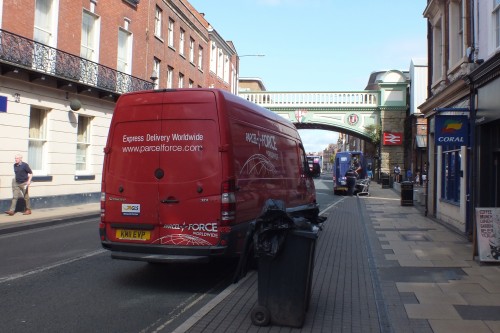 by willr7
I read on another forum that this is just a demonstrator. Not sure wether it’s for warranty cover or not...
A real shame about the continued inconsiderate parking which is a pain for the buses to manoeuvre around!

by Tank90
My understanding is that G4S Money vans can park outside a retailer if dropping off or picking up money and if that means parking on double yellows or in a bus lane it is ok due to the fact they are conveying coinage of the state. This is since the Great Train robbery, also to note the police would be aware of the G4S van due to the fact of robbery.

by SEVERNLINK
Have in the past done multi drop van driving and you can park on double yellows if making a delivery as long as you don't cause an obstruction or there's no restrictions which are usually marked by either a single or double vertical yellow line on the kerb.It's open to interpretation a bit and would say the Parcel Force van could've parked over a bit more.

There are loading bays further away on the opposite side of the road but if you've got a lot or heavy/bulky items to deliver then its easier to park outside.There's also the chance that the loading bays were occupied by cars where someone has just popped into a shop or takeaway which is a very common occurrence in my experience.

Back to the topic...I also saw SK19EYP Wednesday afternoon on the 202