by chason
Next time any of you are inconvenienced by a bus breakdown, think yourselves lucky you are not on a train. Last Saturday I caught a charter from Kidderminster bound for Scarborough and a connecting coach to the North York Moors Railway. After a 10 mile journey towards Birmingham, the train ground to a halt on Old Hill bank just short of the station, the Class 47 diesel having packed up.

Not to worry we thought, only 6 miles from the centre of our second city so help will soon be on hand. WRONG! Three and a half hours later, a Class 66 diesel had been found and got us on our way again, 210 minutes late. The rescue engine had indeed come from Lawley Street in Birmingham but the driver had to come from Derby by taxi. In the meantime the busy line from Brum to Worcester was blocked in both directions with dozens of trains throughout the West Midlands cancelled or delayed and the service in complete chaos.

It was so late, our train only got as far as York where we had a couple of hours to look round but of course never made what we had set out to see. I am now awaiting news of compensation but I am not holding my breath.

So much for our privatised fragmented railway system. British Rail was by no means perfect but did know how to respond to emergencies and had the resources available to deal with them. Now, profit is the only motive so forget the service and the passenger (sorry, I mean customer!).

by TimBrown
Sorry your day out was memorable for all the wrong reasons!

I wasn't going to post these photos, but other contributors may be interested to see that it was 47749 'City of Truro' which caused all the grief. Despite carrying Colas Freight livery this loco was recently acquired by GBRF and is part of their mainline operational fleet, so they will probably pick up the tab for all the lost mileage of local West Midlands Railway services and many Chiltern Railways long distance Marylebone journeys because their units and loco hauled sets trapped in Stourbridge depot holding sidings.

Years ago there would have been locomotives available at Bescot, Saltley and of course the Lickey Bankers (2 x Class 37) would be manned pretty well 24/7 and could have been able to push the failed Charter to the loop at Rowley Regis and run round on to the front and take it through to Saltley where a replacement loco could have taken over. As you say the system is very fragmented and restricted by corporate cost centres and sorting out which company is responsible for the delays.

The Charter is pictured at Shrub Hill, seemingly running OK at this point. 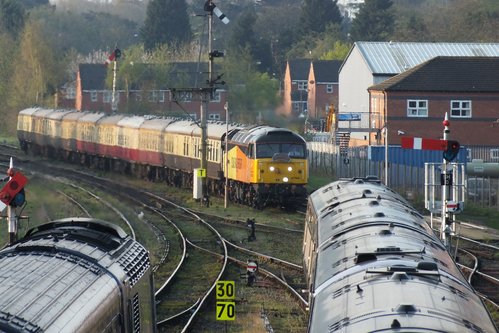 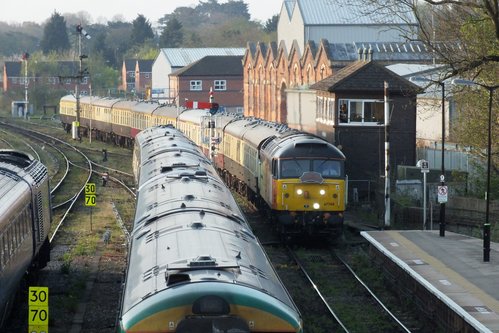 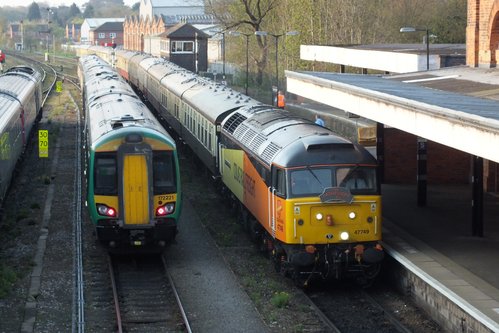 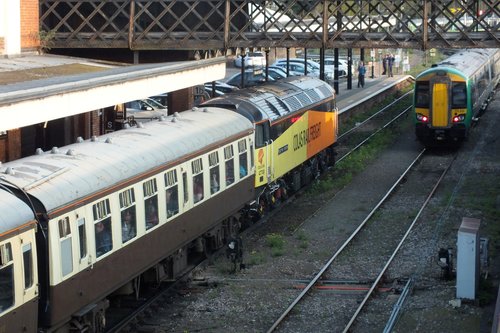 by chason
Thanks, Tim. As you say, the loco seemed to be OK until it failed, having travelled from Newport pretty much to time. It did struggle to pick up speed on departure from Kidderminster and Stourbridge Junction so, on reflection. maybe the driver should have realised something was amiss so would have been wiser not to attempt the Old Hill bank which proved its undoing.

There has been talk on Facebook of the loco having similar problems not long ago so perhaps, again with hindsight, it might have been preferable to use another or perhaps a pair of locos, especially as Class 47s don't have a very good reputation for reliability. If they have to pick up the bill for all the delays it caused, perhaps the lesson will have been learned. Incidentally, no-one seemed quite sure why the line from Galton Junction had been closed - only one Stourbridge bound train passed us in the whole three and a half hours.

by MattW
That's a shame mate. You're both spot on - I remember in my former career at Notwork Rail the big thing was who 'owns' the delay minutes

by ANDREW
I can recall a similar event some years back , not sure exactly when but it was when the Class 86 electrics were on their last legs/wheels, so that would give some idea of the timescale. Travelling back from Euston on the packed last train back to Brum on a Saturday night we coasted to a halt "somewhere in the middle of nowhere north of Watford" ! Around two hours later , a Brush 4 went north , then attached to the front of the train. We were told that the spare loco was at Willesden and the spare driver at Rugby.

To add to our woes , by the time we got going again , the line north of Milton Keynes had been closed for an overnight possession

- so what seemed like every taxi in Milton Keynes got summonsed to the station to ferry us to Brum. Not sure if the taxi's charged by the mile or the hour !!

by chason
Pathfinder Tours had hoped to organise a re-run of the original tour aborted last month but this has not proved possible so they have offered a complete refund, less, understandably, the catering costs or a free trip in the same class seating on a future diesel hauled excursion.

I think we shall probably go for the trip to Weymouth in September hauled by a pair of SVR Class 50's so all's well that ends well and let's hope for better luck next time. Full marks to Pathfinder for good service and for a no quibble outcome and not attempting to hide behind the small print.
All times are UTC+01:00
Page 1 of 1
Powered by phpBB® Forum Software © phpBB Limited
https://www.phpbb.com/