I apologise for repeating two photographs of Optare Solo YN03 ZWA on this website, but wondered if it had been missed under the Diamond Redditch bus station section as there have been no comments, favourable, or otherwise, so far!

A new operator in Worcestershire, possibly new to stage carriage work, is Finesse Travel of Worcester whose Optare Solo is seen operating route 354 from Redditch to Droitwich via Feckenham and Hanbury. This Tuesdays and Thursdays only service does two round trips from Droitwich to Redditch and back each day of operation. I haven't checked which operator previously owned this vehicle, but it has fancy wheel discs all round, dual-purpose type seats and what appears to be side window curtains! 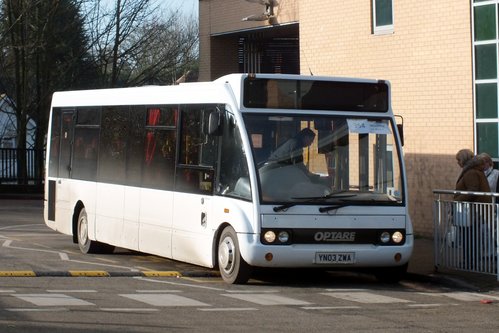 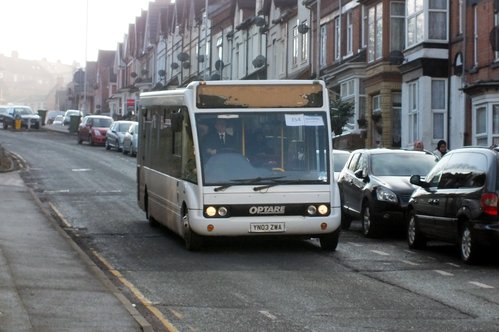 Thanks for highlighting this, Tim.

It is interesting that in these difficult times and very tight economics for bus operators, that there are still a few willing to enter the sector.

I guess this work fits in with other work they've got, or intend to get.
Top

New to St. Dunstans , Brighton and recorded as a "DP" vehicle.

Thanks for the information;

Bus lists on the web states it is an Optare Solo type M930 with B31F layout and it was indeed new to St. Dunston's, Brighton 08/03.

St Dunston's is a Charity set up to assist blind veterans in 1915 and it was renamed Blind Veterans UK in 2012. They run a large rehabilitation centre at Ovingdean in Brighton which has been in use since 1938. Was the bus used for staff transport, or to take visually impaired people on trips to places of interest and help regain independence; - perhaps a mixture of both?

One photo on the internet shows the interior of the bus with seats having headrests and seat belts, so the designation may be better expressed as DP31F.

YN03 ZWA was acquired by Pickford (Faresaver), Chippenham 01/15, and I presume the current owner has owned it since December 2017?
Top

St. Dunstans /Blind Veterans operate a large fleet of mainly eight seater VW mini-buses as well as some Solo's. As mentioned , plenty of photo's on the internet [ Flickr ].

Noted between trips in Droitwich this afternoon - curtains still in situ . . . . .